Ruairidh is the result of a mating between a UK field trial bitch and an American working line champion. He came to Marsagan Labradors as an eight week old puppy from Huntogun Labradors in Tasmania. Ruairidh then spent the next 8 months being professionally trained for competing in retrieving trials starting in the 2022 season. I am looking forward to see what he can achieve in the upcoming season.

Ruairidh has matured into a lovely dog, with a medium fox red coloured coat. He currently weighs 28kg and has some filling out to do. His temperament is easy going, biddable and very sociable. Like most labradors, Ruairidh is a keen swimmer. He is the champion water bomber and if he can land on one of his kennel mates head while doing so, even better!! He has a very interesting pedigree, being 50% American and 50% British with many field trial champions on both his Dam and Sire's side. His sire is one of the top titled field trial dogs in America.

Ruairidh has passed all his health checks with flying colours and is now ready to perform stud duties to approved bitches. 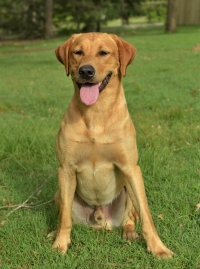 Marsagan Labradors is extremely diligent in making sure our progeny are not bred from parents that can produce puppies that are affected with inheritable diseases. To help us achieve this, we have our breeding stock DNA profiled by Orivet Genetics. Many of the diseases that present themselves in the Labrador breed are auto recessive which means that in order for the disease to be present it needs two copies of the affected gene, one from the sire and one from the dam.

The breeding outcomes shown in the diagrams below represent what are the expected outcomes (average) when mating NORMAL, CARRIER and AFFECTED animals. The outcomes are based on Mendelian genetics that states each individual has two factors for each trait, one from each parent. Some of the outcomes below may vary due to the probability of inheritance not being equal. 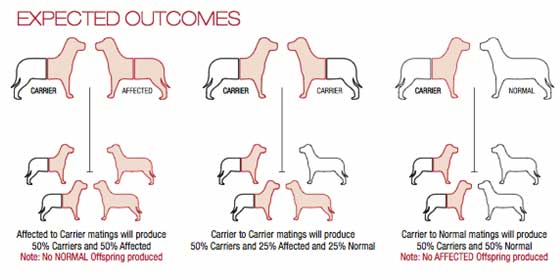 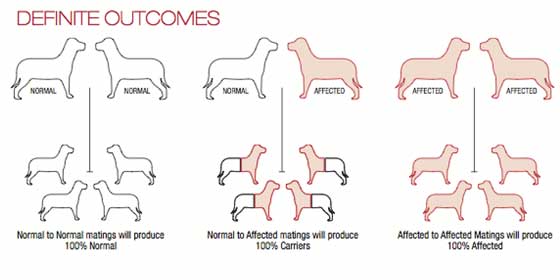 Labradors come in 3 basic colours. If you would like to know more about Labrador coat colours and how they are inherited click the link below...