Hip dysplasia in Dogs is a disease of the hip in which the ball and socket joint is malformed. This malformation means that the ball portion and its socket don’t properly meet one another, resulting in a joint that rubs and grinds instead of sliding smoothly.

Influences on the development and progression of hip dysplasia are concurrent with both genetic and environmental factors: Genetic susceptibility for hip looseness or laxity, rapid weight gain and obesity, nutritional factors, pelvic-muscle mass, excessive exercise.

Elbow dysplasia is a condition caused by the abnormal growth of cells, tissue, or bone. The condition is characterized by a series of four developmental abnormalities that lead to malformation and degeneration of the elbow joint. It is the most common cause of elbow pain and lameness, and one of the most common causes of forelimb lameness in large and giant-breed dogs. Labrador retrievers, Rottweilers, Golden retrievers, German shepherd dogs, Bernese mountain dogs, chow chows, bearded collies, and Newfoundland breeds are the most commonly affected. The age for onset of clinical signs is typically four to ten months, with diagnosis generally being made around 4 to 18 months. The causes are genetic, developmental, and nutritional.

Progressive retinal atrophy (PRA), also known as progressive rod and cone degeneration (PRCD), refers to a group of degenerative eye disorders that cause blindness in both eyes. The retina is a delicate membrane lining the back of the eyes. It is responsible for absorbing, reflecting and perceiving light and is essential to vision. PRA isn’t well-understood, although it probably is a genetic disorder.

Most forms of progressive retinal atrophy are passed from parent to offspring in an inheritance pattern known as autosomal recessive. If a dog has inherited the gene responsible for PRA from only one parent, it will not develop the disease but will be a carrier of the trait – meaning that if bred, it can pass that gene on to its offspring. However, if a dog inherits the “PRA gene” from both parents, it will eventually develop clinical PRA.

The syndrome of exercise-induced collapse (EIC) in dogs is manifested by muscle weakness, incoordination and complete loss of control of the limbs after five to fifteen minutes of strenuous exercise. Dogs suffering from such condition develop a wobbly gait which soon progresses to non-painful paralysis of the rear limbs and may include all four limbs. Collapse episodes usually last for 5-10 minutes; within 30 minutes there is often complete recovery, but occasionally such episodes can be fatal. EIC is inherited as an autosomal recessive trait, which means that individuals with two copies of the DNM1 mutation, inherited from both parents, are at the highest risk of developing EIC. Carriers of only one copy of the mutation are not expected to develop the disease but will pass the mutation to their offspring.

Several hereditary forms of disproportionate dwarfism or “short-legged” phenotype have been recognized by breeders of Labrador Retrievers over the years. A distinct form of a mild skeletal dysplasia type 2, termed SD2, is characterized by short legs with normal body length and width. In contrast to more severe conditions such as Oculoskeletal Dysplasia (OSD) or radius curvus deformity, SD2 has a very subtle phenotype without any obvious ocular or auditory defects and without known secondary joint problems. Still, this form of disproportionate dwarfism is not a desirable trait and can result in Labrador Retrievers failing to reach the international height standard for the breed. Genetically, SD2 is inherited as a monogenic autosomal recessive trait. Dogs of both sexes with two copies of the mutation usually display disproportional dwarfism and they are classified as affected homozygotes. Carriers of one copy of the mutation have normal appearance. Because height is controlled by multiple factors, the impact of the COL11A2 mutation on a dog’s stature can be less obvious in Labradors that are at the taller edge of the spectrum for the breed.

Centronuclear Myopathy (CNM), also known as type II muscle fibre deficiency, is a distinct form of inherited muscular myopathy in the Labrador Retriever. Clinical signs of the disease in affected puppies include a progressive significant weight loss starting at two weeks of age, the absence of tendon reflexes at about one month of age, followed by the development of an awkward gait and decreased exercise tolerance due to generalized muscle weakness between 2 to 5 months. In adults, the most striking feature of the disease progression is the atrophy of temporal, cervical and leg muscles, leading to abnormal postures and movements, as well as a predisposition to respiratory complications. The Centronuclear Myopathy is inherited in an autosomal recessive mode with both sexes equally affected when a dog receives two copies of the mutated gene. Carriers of one copy of the insertion do not develop clinical symptoms.

Narcolepsy is an autosomal-recessive genetic disease of dogs. Narcolepsy is a debilitating sleep disorder with excessive daytime sleepiness and cataplexy as its two major symptoms. The genetic disorder is thought to result in hypocretin (orexin) neurotransmission deficiency, resulting in uncontrollable sleep patterns. An autoimmune etiology has been suggested for narcolepsy but never proven. This disease has been reported in the Dachshund, Doberman, Labrador Retriever and Labradoodle. Affected dogs appear to fall asleep, suddenly losing control of their hind legs or collapsing in complete paralysis, while still being entirely aware of their surroundings. Attacks last from a few seconds to a few minutes and end with no residual effects. Some sporadic cases of narcolepsy are not inherited.

Hereditary nasal parakeratosis (HNPK) is an inherited autosomal recessive disorder in Labrador Retrievers. A mutation T>G in the SUV39H2 gene causes the nose to dry out leading to chronic irritation and inflammation of the noses skin. Because HNPK is a recessive disorder, a dog must have two copies of the mutation in order for the disease to manifest. This means that a dog can have one copy of the mutation and not experience any signs or symptoms of HNPK 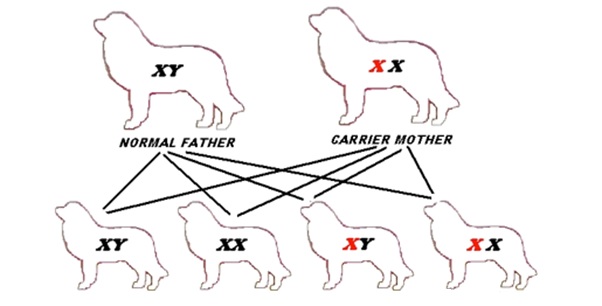 Mode of inheritance is the pattern or the manner in which a particular genetic trait or disease is passed from one generation to the next. Common modes of inheritance are listed below.

Penetrance refers to the percentage of individuals with the damaged/mutant gene that show the physical feature and symptoms of the disorder. Most autosomal conditions have complete penetrance, but some diseases have incomplete (or reduced) penetrance. Incomplete penetrance is most likely a result of the way the gene interacts with other genes as well as the environment. Lastly, it may cause the disorder to look like it is “skipping” individuals or generations, while in reality it is not. Conditions with incomplete penetrance includes some diseases such as exercise induced collapse and secondary glaucoma whereby an affected animal may not show symptoms or “a low level of symptoms” until external influences force the defect to appear.

Refers to the mode of inheritance of quantitative traits. Polygenetic diseases are influenced by multiple (two or more) genes, not just one. In addition to involving multiple genes, the environment and nutrition also play a part in the development of the disease. An example of a polygenetic disease is hip dysplasia.

Labradors come in 3 basic colours. If you would like to know more about Labrador coat colours and how they are inherited click the link below...